Stories you won’t read anywhere else. The Twenty-Year War is a look into the journeys of American service members fighting in and then leaving behind a war spanning over two decades.

American veterans open up about their service, the sobering realities of combat, their transitions post-military, and what it’s like to find purpose and meaning after hanging up their uniform. 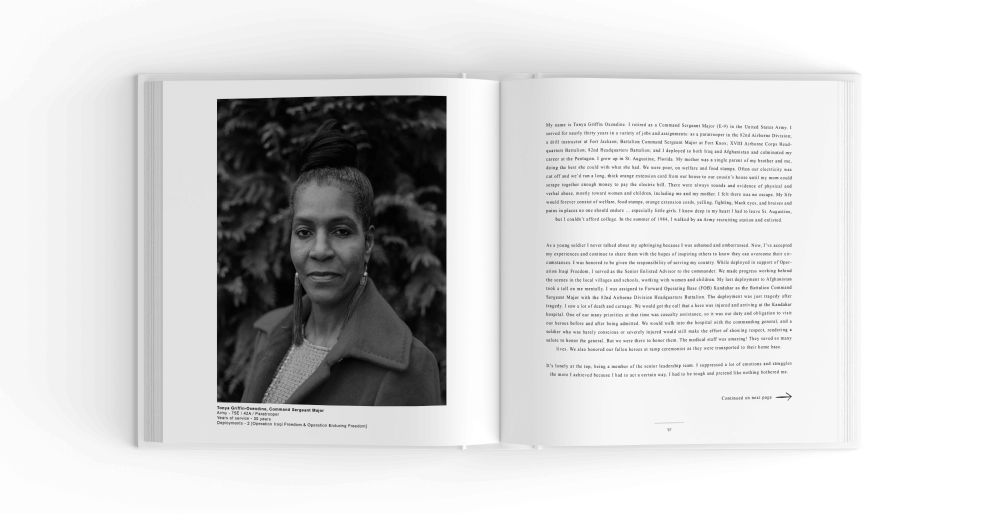 My name is Tonya Griffin Oxendine. I retired as a Command Sergeant Major (E-9) in the United States Army. I served for nearly thirty years in a variety of jobs and assignments: as a paratrooper in the 82nd Airborne Division; a drill instructor at Fort Jackson; Battalion Command Sergeant Major at Fort Knox; XVIII Airborne Corps Headquarters Battalion; 82nd Headquarters Battalion; and I deployed to both Iraq and Afghanistan and culminated my career at the Pentagon.

A Truly Unique Look In Military Service and Transition

Included in this museum quality coffee table book are the stories of fathers and sons, husbands and wives, sisters and brothers who served together.

With a foreword written by former US Central Command and US Special Operations Commanding General, Joseph Votel, The Twenty-Year War is the untold stories of American service and transition. 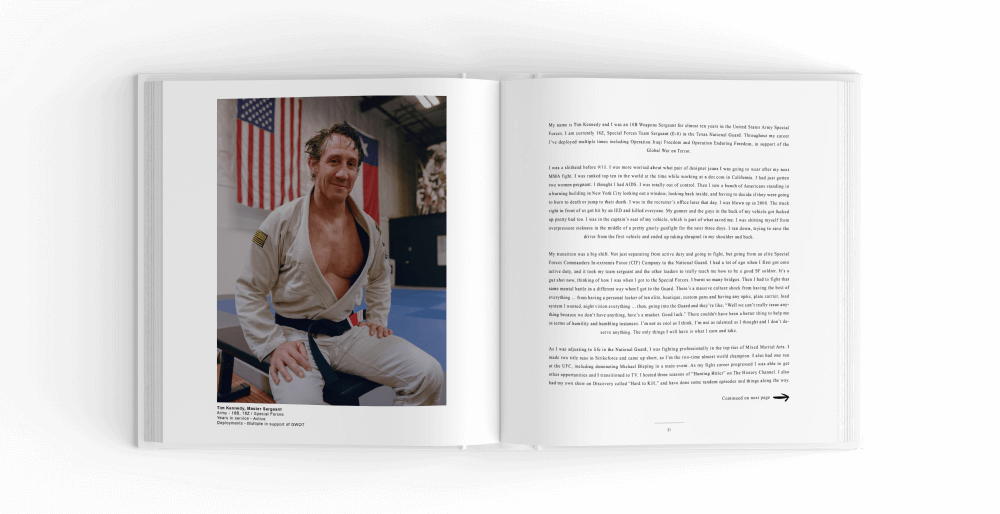 My name is Tim Kennedy and I was an 18B Weapons Sergeant for almost ten years in the United States Army Special Forces. I am currently 18Z, Special Forces Team Sergeant (E-8) in the Texas National Guard. Throughout my career I’ve deployed multiple times including Operation Iraqi Freedom and Operation Enduring Freedom, in support of the Global War on Terror. I was a shithead before 9/11. I was more worried about what pair of designer jeans I was going to wear after my next MMA fight.

Uniformed Service is Just the Start

The portraits are explosive, gritty, and tell the authentic story of American service. United by their service to the nation, and their challenges in transitioning back to civilian life, the veterans give you a unique look into what happens when the paperwork is finalized and a American service member becomes a veteran.

My name is Sophie Hilaire and I was a 90A Ordnance Officer in the United States Army. I deployed in support of Operation Enduring Freedom from 2012-13. I left the military as a Captain (O-3). I had a busy first summer after separating from the Army; I took a solo trip across Mongolia, volunteered at a Syrian refugee camp, and became a yoga instructor in Costa Rica. I also crossed off my fiftieth state by climbing Denali in Alaska, and started to get into mountaineering. Professionally, my next stop was getting a Wharton MBA, which led to my first civilian job at McKinsey & Company, where I’ve been a management consultant for four years. My readjustment post-Army was tough. I’d just left an organization that felt like a family; some of my soldiers wept during my farewell, which almost made me question leaving. It felt strange trading that environment for the parties at business school, where I initially struggled to connect with my peers in ways beyond alcohol. While at McKinsey, I pulled the trigger on a longtime pipe dream and climbed Mt. Everest.

Limited Edition bundle includes:
(Slipcover Design is a representation of final product and may be altered slightly)
Available Now

Read stories you won't read anywhere else in this museum quality coffee table book. These are the stories of fathers and sons, husbands and wives, sisters and brothers who served together.

With a foreword written by former US Central Command and US Special Operations Commanding General, Joseph Votel, The Twenty-Year War is the untold stories of American service and transition. 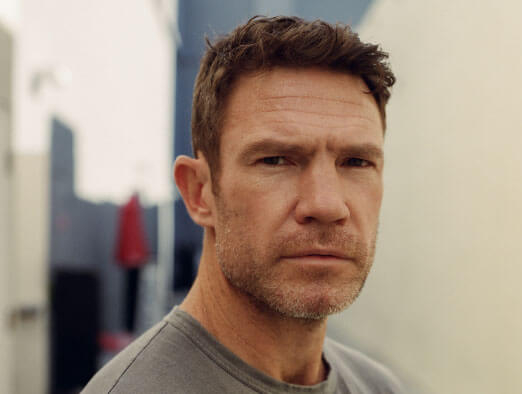 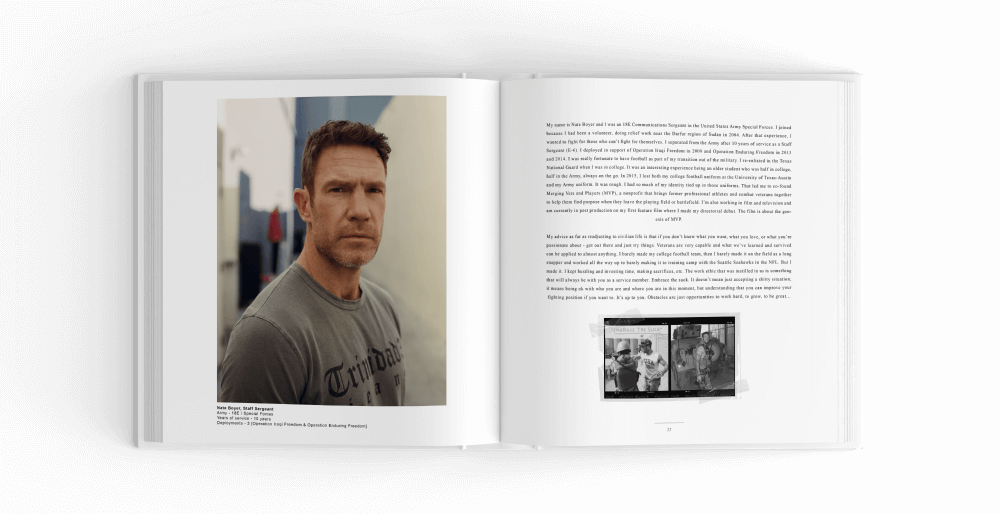 My name is Nate Boyer and I was an 18E Communications Sergeant in the United States Army Special Forces. I joined because I had been a volunteer, doing relief work near the Darfur region of Sudan in 2004. After that experience, I wanted to fight for those who can’t fight for themselves. I separated from the Army after 10 years of service as a Staff Sergeant (E-6). I deployed in support of Operation Iraqi Freedom in 2008 and Operation Enduring Freedom in 2013 and 2014. I was really fortunate to have football as part of my transition out of the military. I re-enlisted in the Texas National Guard when I was in college. It was an interesting experience being an older student who was half in college, half in the Army, always on the go. In 2015, I lost both my college football uniform at the University of Texas-Austin and my Army uniform. It was rough. I had so much of my identity tied up in those uniforms. That led me to co-found Merging Vets and Players (MVP), a nonprofit that brings former professional athletes and combat veterans together to help them find purpose when they leave the playing field or battlefield. I’m also working in film and television and am currently in post production on my first feature film where I made my directorial debut. The film is about the genesis of MVP.

My advice as far as readjusting to civilian life is that if you don’t know what you want, what you love, or what you’re passionate about - get out there and just try things. Veterans are very capable and what we’ve learned and survived can be applied to almost anything. I barely made my college football team, then I barely made it on the field as a long snapper and worked all the way up to barely making it to training camp with the Seattle Seahawks in the NFL. But I made it. I kept hustling and investing time, making sacrifices, etc. The work ethic that was instilled in us is something that will always be with you as a service member. Embrace the suck. It doesn’t mean just accepting a shitty situation; it means being ok with who you are and where you are in this moment, but understanding that you can improve your fighting position if you want to. It’s up to you. Obstacles are just opportunities to work hard, to grow, to be great...

Beau Simmons has been a professional photographer since 2009. He grew up just outside Joshua Tree National Park. An adventurer, Beau grew up working on and racing motorcycles as a boy. He made a name for himself at 21 in the fashion industry working with clients including Marc Jacobs, 7 For All Mankind, Guess Jeans, and Converse. Beau captures his work exclusively on film using the lost art of medium format film photography, feeling it gives a classic look and feel to his work.

The fashion scene began to grind on Beau. Being a cowboy is in his blood. In this spirit, he decided to pursue his passion for capturing classic Americana and the wonder of the American landscape. Through this American journey, he was introduced to the veteran non-profit Heroes and Horses. A group that uses equine therapy to help veterans cope with PTSD and traumatic brain injuries. His commitment to telling an authentic story about American veterans is on full display in his first feature coffee table book, The Twenty-Year War.

Dan’s transition from military to civilian was not easy. Over the years he has seen firsthand a trend in the veteran community which paralleled his own experiences. “It’s a lack of understanding of the skills veterans bring to the table, our proven leadership, our commitment to teammates, our unwavering desire to increase potential and be our best,” Dan said recently. Dan’s passion for veteran success and telling their stories was the inspiration for his first book, The Twenty-Year War.

Tom Amenta was born in Chicago, IL, and grew up in the area before enlisting, against his family’s wishes, into the United States Army on his 18th birthday. Following his five years as a member of the 75th Ranger Regiment, including two combat tours in support of Operation Enduring Freedom, Tom earned his degree in political science from the University of Illinois.

Tom spent the next eight years as the COO of the veteran lifestyle apparel company Ranger Up. He pioneered the veteran lifestyle apparel category and helped grow Ranger Up into the premier company in the space. While at Ranger Up he passionately advocated for veterans’ causes in many spaces, including lobbying Senate service committees. Leveraging the success at Ranger Up he helped produce and starred in the only fully veteran-produced Hollywood movie, Range 15. He is a passionate advocate for veteran entrepreneurship and assisting veterans in transition led to him authoring his first book, The Twenty-Year War.